Wycliffe Well, located 130 kilometres south of Tennant Creek and 380 kilometres north of Alice Springs, is famous for visitors of the extraterrestrial kind. UFO sightings have been part of Wycliffe Well’s folklore since World War II, and the town’s reputation for the unexplained attracts all types: even the Royal Australian Air Force has stopped in to investigate. Two model aliens sit out the front of the Wycliffe Well Holiday Park to welcome travellers, and the Park’s owner tells that many claim to have seen UFOs zipping around the night sky. He also boasts that the Park’s bar has the biggest range of beer available in Australia, and notes that this is perhaps a contributing factor to the presence of UFOs. 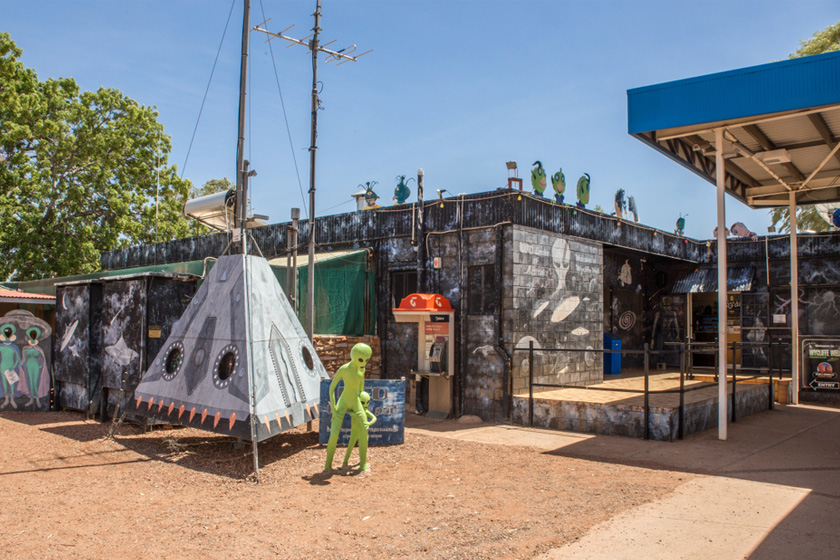 As with most stops along the Stuart Highway, Wycliffe Well began as a watering point along the stock route for the Overland Telegraph Line in the 1860s. World War II saw Wycliffe Well become a market garden centre to service troops, and at the end of the war, two soldiers stayed on to continue selling vegetables and garden products to Alice Springs. In 1960, a petrol pump was installed in Wycliffe Well, and the town has since been reinvented as a favourite stop-over for travellers. Today Wycliffe Well is essentially made up of Wycliffe Well Holiday Park. The Park covers 60 acres and includes a large lake for fishing and recreation. The Davenport Ranges and the Devils Marbles are located within easy reach of the town.

Discover some of the accommodation in and around Wycliffe Well