St Kilda began in the Victorian era as a fashionable hideaway for the mansions of the city’s elite and developed into the 20th century as a playground for Melburnians. Post WWII, this Melbourne suburb became a notorious red light district but it was rejuvenated in the 1960s as a thriving centre for bohemian culture. Nowadays, gentrification is the buzzword, although St Kilda is still home to popular visitor attractions such as Fitzroy and Ackland streets, and the iconic Luna Park amusement park. 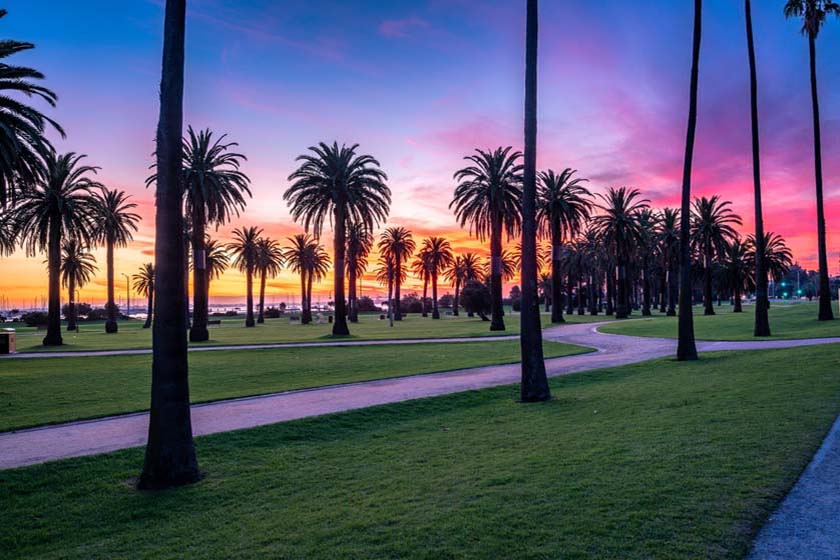 Set along an almost completely enclosed lagoon within the bay, St Kilda boasts the city’s famous St Kilda Beach and several theatres, and is a hub for a number of Melbourne’s lively festivals. Its historic heart is Luna Park, a traditional amusement park built in 1912 and still going strong with its most famous ride, the Scenic Railway, the world’s oldest rollercoaster and its traditional carousel, now restored to its former glory.

Ackland and Fitzroy streets are all about eating, drinking and people watching, with Ackland Street packed with fashionable restaurants, trendy wine bars and cool cafés, as well as irresistible delis and patisseries. Fitzroy Street’s open-air coffee shops are the places for people-watching while enjoying several cups of the delicious brew. All Melbourne life is here, from affluent residents seeing and being seen to denizens of the night.

Another ‘don’t miss’ in this quirky district is the Sunday evening flea market held at the Upper Esplanade. Crammed with a variety of creative and innovative items at great prices, the market gives a great choice of unique souvenirs of your trip. The district is just six kilometres from downtown Melbourne and is easily reached from city centre hotels by a 25-minute tram journey via routes 16, 96 or 112.

Discover some of the accommodation in and around St Kilda