Just off the coast from Queensland’s Hervey Bay, is World Heritage Listed Fraser Island – the largest sand island in the world and the only place on the planet where rainforest grows on sand! Over 120 kilometres long and over 30 kilometres across at its widest point, the Island has developed over 800,000 years and is a unique natural environment. 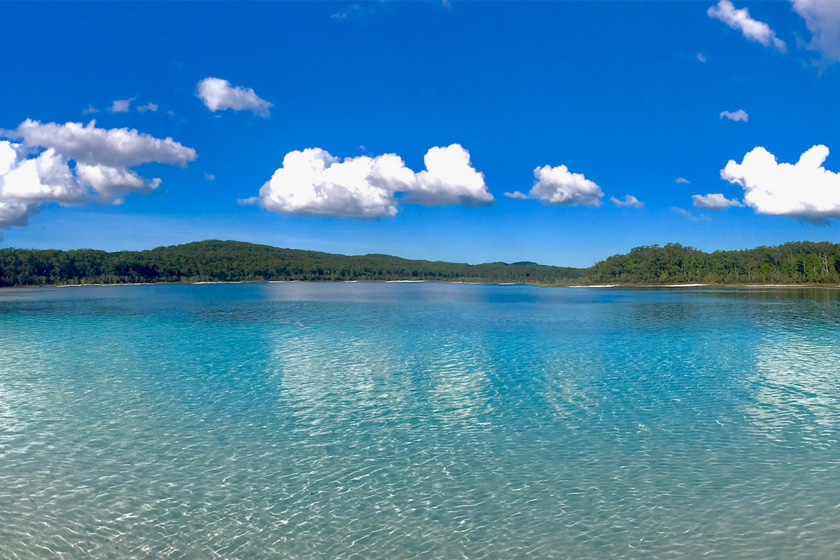 Named ‘K’gari’ (meaning paradise) Fraser Island was home to the Butchulla people who lived on the island for over 5,500 years. Their heritage is evident in archaeological sites, midden heaps, ceremonial bora rings, and stone implements. European history credits Fraser’s discovery to Captain James Cook. The island was named after Eliza Fraser in remembrance of her dramatic shipwreck.

Fraser Island boasts a wealth of natural attractions: pristine fresh water lakes such as McKenzie, Boomanjin, Allom and the spectacular Lake Wabby; crystal clear creeks – Eli Creek being the most well-known; Champagne Pools – wonderful swimming rock-pools; the amazing coloured sand formations known as The Cathedrals and the Central Station camping area and ranger station. On the eastern beach, near Happy Valley you will discover Fraser Island’s own shipwreck – The Maheno. For full details on each of these popular attractions of Fraser Island search under “natural attractions” on this website.

Fraser Island is home to thousands of species of birds and its warm waters attract dugong, dolphins and turtles. The magnificent humpback whales, with their young, pass on the western side of the island between August and November.

You can visit Fraser Island either by taking a cruise across the Great Sandy Strait and joining a guided 4WD tour, or as a foot-passenger to the western side, or by self-driving (for 4WD vehicles only). Access requires crossing by either catamaran, barge, helicopter or charter aircraft.

Fraser Island is the largest sand island in the world of which 98% is national park and World Heritage listed. You need a 4WD to get around the island. There are camping and resort facilities or go whale watching in Hervey Bay. Fraser Island is the only place on the planet where rainforest grows on sand!  Fraser Island is home to thousands of species of birds and its warm waters attract dugong, dolphins and turtles. The magnificent humpback whales, with their young, pass on the western side of the island between August and November. 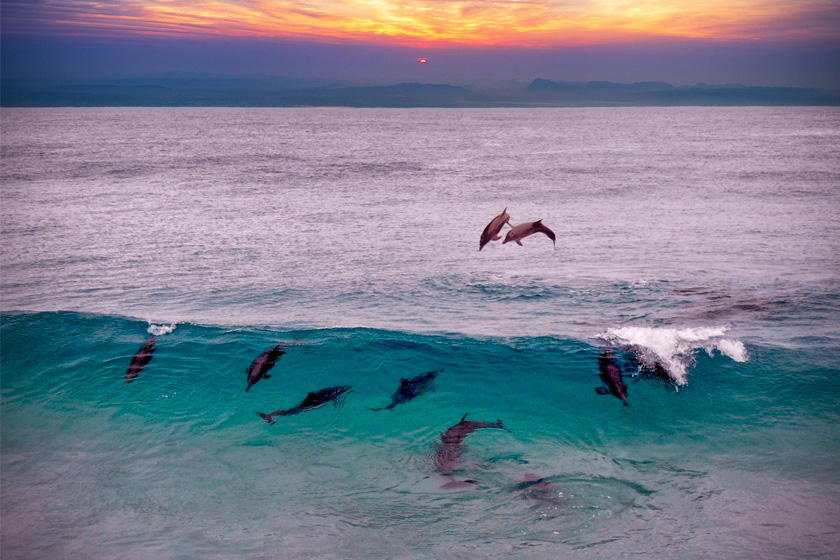 Just one hour from downtown Brisbane, Bribie Island is an attractive and unspoilt 31-kilometre long island. It is Queensland’s only offshore island linked by bridge and is separated from the mainland by Pumicestone Passage, a stunningly beautiful passage of water that is home to more than 350 species of birdlife, dugongs, turtles and dolphins. It also provides excellent fishing and boating.

North Stradbroke Island, affectionately referred to as ‘Straddie’, the elongated sand island of North Stradbroke shields much of the southern part of Moreton Bay and the smaller islands from the ocean swells. There is whale watching from Point Lookout during winter and there is also good surfing throughout the year. The ideal way to see the Island is by four-wheel drive.

Catch a ferry to the eco-friendly South Stradbroke Island. The island has several resorts that offer facilities for day trippers, including water sports and environmental tours and is also great for beach fishing, swimming and surfing.

Fraser Island is a nature lover’s dream. The world’s largest sand island (measuring 184,000 hectares) is an ecological masterpiece. It is the only place in the world where tall rainforests grow on sand dunes. 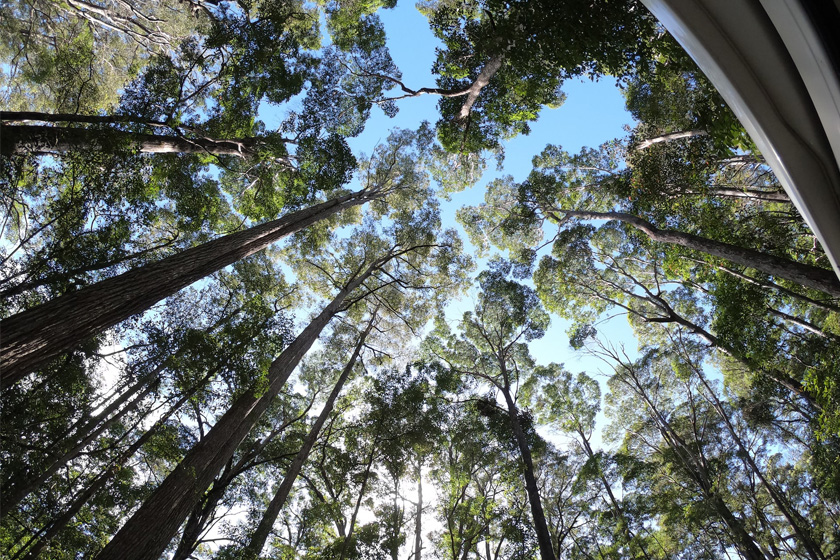 The World Heritage-listed island features some of the most spectacular beaches, headlands, lakes, creeks and rainforests in Queensland. Its Aboriginal name K’Gari appropriately means paradise and a visit here will leave you feeling charmed and captivated. Located just off the coast from Hervey Bay, Fraser Island has much to offer.

Superb white sandy beaches fringed by a blue ocean stretch for miles on end. Seventy-Five Mile Beach on the eastern side of the island is nothing short of spectacular. Fraser also has the second-largest concentration of lakes in Australia (after Tasmania). There are more than 100 freshwater lakes and more than 40 perched lakes.

The island has about 230 species of birds and 25 species of mammals including wallabies, possums, flying foxes, echidnas and Eastern Australia’s purest breed of dingo. The warm waters surrounding the island attract dugong, dolphins and turtles and, between August and October each year, humpback whales.

Visitors to Fraser can enjoy day cruises, camping safaris, or can stay on the island overnight. There’s luxury accommodation at Kingfisher Bay Resort, Fraser Island Retreat and Eurong or you can camp under the stars.

Island has plenty to do

You’ll never get bored on Fraser Island, the world’s largest sand island. It is both a delicate eco-system and a magnificent playground. And huge – 184,000 hectares and stretching over 120 kilometres offshore from the Fraser Coast. And all just 260 kilometres from Brisbane. 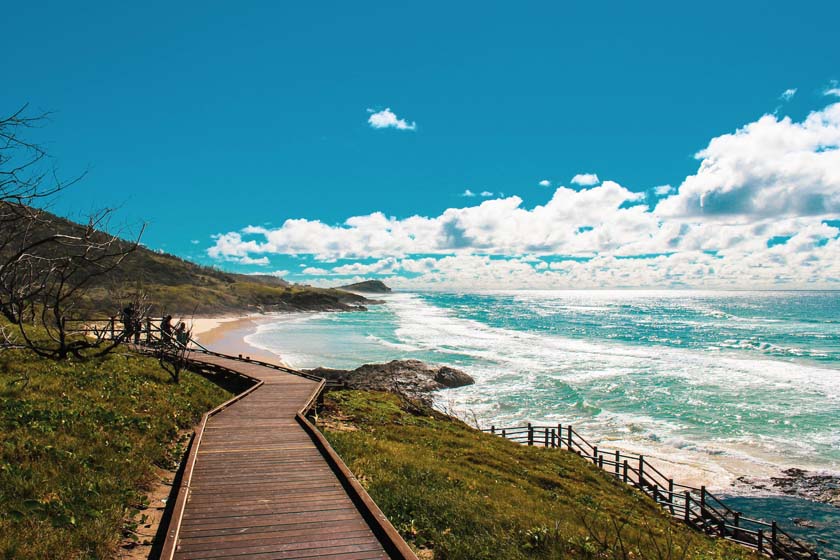 Take a catamaran ride over from Maryborough, or a short flight from Brisbane, and you might be lucky enough to glimpse migrating humpback whales on the way over at the right time of year. Once over, you’ll find Fraser Island’s ecology and its fauna make it an ideal lazing or adventure holiday. Fraser of course has fine white sandy beaches, and these stretch for miles and miles, perfect for swimming, fishing, four-wheel driving and long, long walks.

It is scenic here – Fraser is the only place in the world where tall rainforests grow on sand dunes at elevations of more than 200 metres. The bushwalking opportunities are excellent. Fraser has more than 100 freshwater lakes and more than 40 perched lakes – and you’ll love the wildlife here. Visitors can either take a day cruise, go Fraser Island camping or take a holiday in comfort. There are three resorts to choose from, and you can also rent houses on the island.

One of the most popular pursuits on Fraser, is four-wheel driving on the beach. You can get maps before you start out which carry routes and handy tips, and some of the resorts offer “how to”, courses for enthusiastic beginners. There are also tours which will do it all for you. Just sit back and hold on!

Catch the vehicular ferry from Hervey Bay, ensuring you have obtained a 4WD vehicle permit. Travel inland on the way to Lake Allom, a great spot for viewing resident turtles.
Head east to visit the Knifeblade Sandblow, resulting from the gradual sand shifts on the island. South of here, is the Maheno Shipwreck on the 75 Mile beach, the victim of a cyclone over 60 years ago. 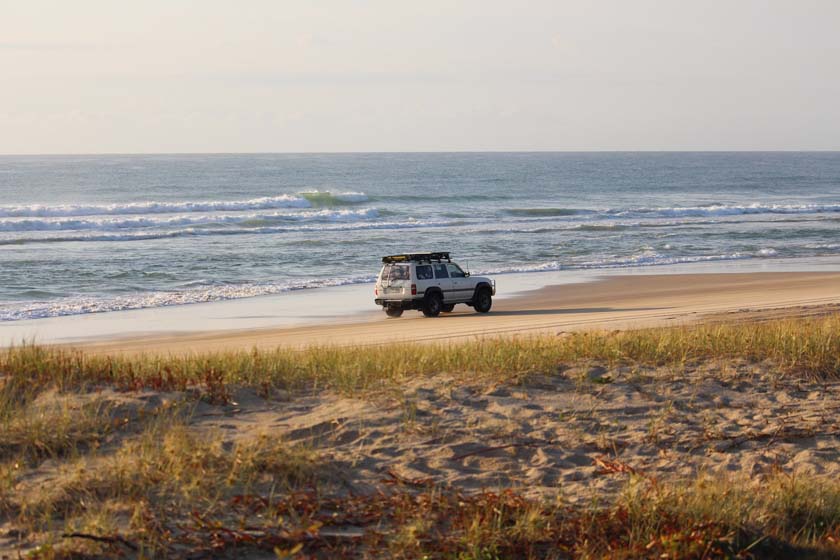 On to Eli Creek, the largest, pristine freshwater stream. Nearby, the Pinnacles and the Cathedrals have been sculpted by wind and rain and their unique colours are a must see.
At the northern end of the 75 mile beach you will find Indian Head, the rocky headland that anchors the sands that form Fraser Island. Near Indian Head, the Champagne Pools are naturally formed rock pools and are a great bathing experience, shielded from the surf. Other beaches nearby are the picturesque Orchid Beach and Cathedral Beach.

At the southern end of the 75 mile beach you can visit Lake Wabby, one of the many crystal clear lakes on the island, great for swimming.

Happy Valley is a popular spot for the start of several scenic drives. From here you can travel into the heart of Fraser Island to the incredible Yidney Scrub Rainforest.  South of the rainforest is the tranquil Lake Garawongera, where you can swim and enjoy birdwatching.

Discover some of the accommodation in and around Fraser Island

Discover some of the tours options around Fraser Island