The popular Victoria seaside resort of Lorne is prettily set on wide Loutit Bay along the estuary of the River Erskine. It makes for a popular stop-off for tourists driving the Great Ocean Road. Its population of around 1,000 inhabitants swells considerably during the holiday season to around 13,000 during the New Year festivities and to about 20,000 during the Falls Festival in early January, with its famous Pier to Pub Swim, Mountain to Surf Run and Surf Boat Race. 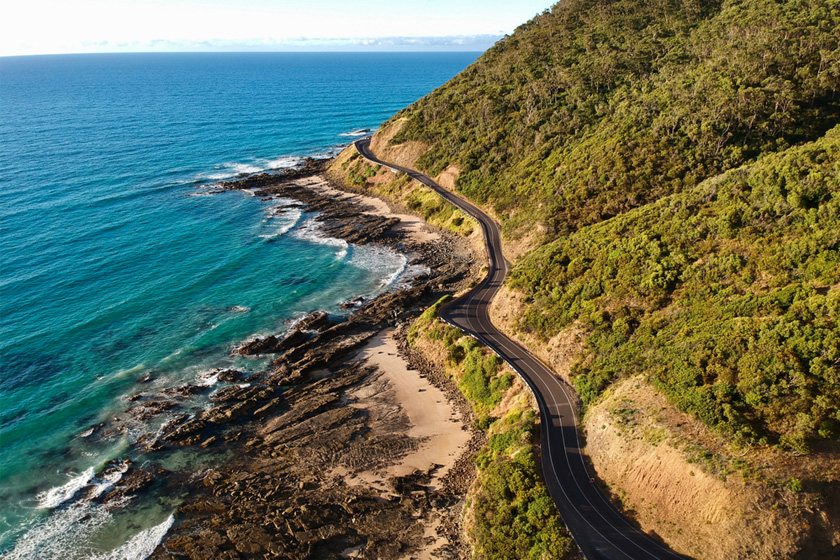 Lorne is a typical Australian seaside resort featuring a great selection of hotels, motels, bed and breakfasts, and self-catering options. Several of its many restaurants and cafés have gained mention in Melbourne media and food guides, with everything from pub grub and Greek, Italian and Arab eateries to traditional fish and chip shops open at all hours. The upscale restaurants tend to close in the afternoons, but the burger bars and other eateries take care of hungry visitors at all times.

Lorne has everything you’d expect from a seaside town, including a pier, lots of shops selling souvenirs and plenty of traditional pubs. Its Forest Park area is set on the edge of town and holds a treasure trove of woods, walking trails and BBQ areas. The three-kilometre long beach is pristine and perfect for surfing or diving and snorkelling in the clear waters. Fishing is a prime sport here, especially from the pier with its dedicating bays, and deep-sea fishing can be arranged.

Great Otway National Park is just a short drive away from Lorne’s Mediterranean ambiance and boasts lovely Erskine Falls, rainforested hills, the Cumberland River and superb views over Loutit Bay. Birdlife and indigenous animals can all be seen here, and the plant life is ancient and little changed over many millennia. The coastal reaches of the park lead to remote Cape Otway with its wild Johanna Beach and isolated Blanket Bay.

Discover some of the accommodation in and around Lorne

Discover some of the tours options around Lorne