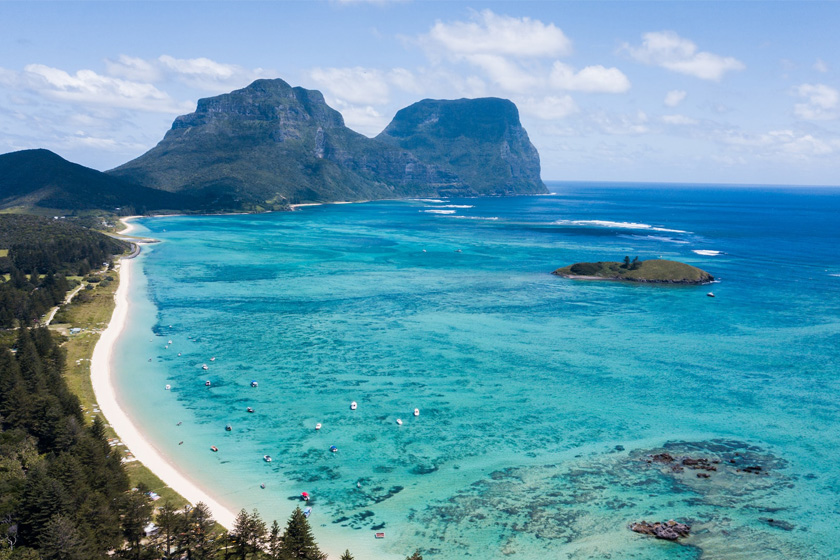 Australia’s Lord Howe Island is one of the world’s great vacation destinations, an island paradise located 660km off the east coast of Australia. The island is just a short flight (less than two hours) from Brisbane or Sydney.

The breath taking beauty and tropical ambience is an incredible experience from the moment you arrive, and you will easily see why Lord Howe Island is often called Australia’s last great paradise.

A tiny treasure rising out of the emptiness of the southern Pacific Ocean and part of the Australian state of New South Wales, Lord Howe Island is one of the world’s last truly unspoiled Island destinations. Just 11 km long and 2 km wide, two thirds of its land mass is covered by Banyan, Pandanus and native Kentia Palm forests, its many perfect beaches are safe, pristine and tranquil.

Guided and self-guided bush treks, fish feeding at Ned’s Beach, bicycling, bird watching tours, cruising around the Island, kayaking, reef walking, snorkelling and scuba diving, or just laying around in a world class world heritage environment, are some of the favourite things to do. 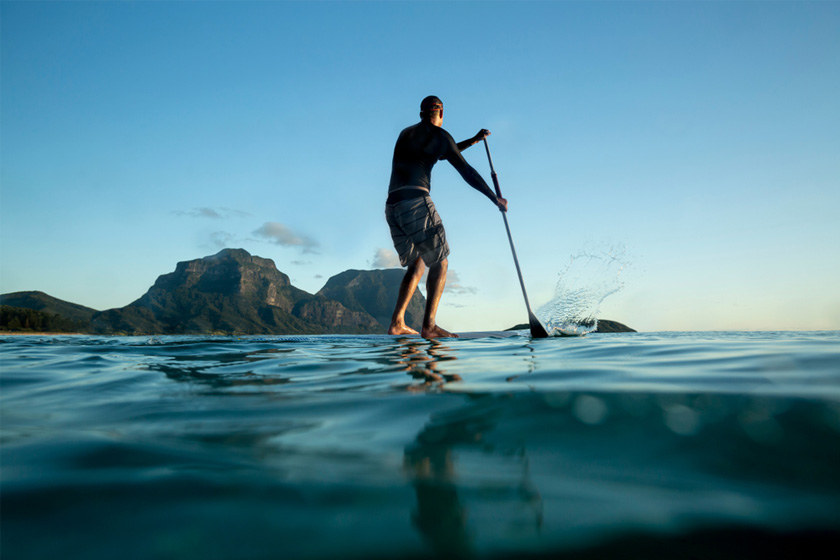 The crystal waters that abound in marine life comprises over 400 species of fish, 90 species of coral, 4% of which is unique to the Island. Perfect for snorkelling, scuba diving, and fishing.

World Heritage listed in 1982 for its rare collection of flora, fauna and marine life and only one of four Island groups in the world to have this listing, Lord Howe is the perfect sanctuary for nature-lovers, adventure seekers (try the 8 hour rope-assisted climb up Mt. Gower), romantic getaways and ‘stress-breaker’ weekends.

With its abundance of rainforests, coral reefs, beaches and volcanic peaks, this World Heritage-listed island is truly unique.

Only 11 kilometres long, Lord Howe Island is packed with diverse plant and marine life. The island has a limit on visitor numbers so you’ll never compete for space. Because of its location, the island enjoys a temperate all-year climate. The sea water is consistently warm. 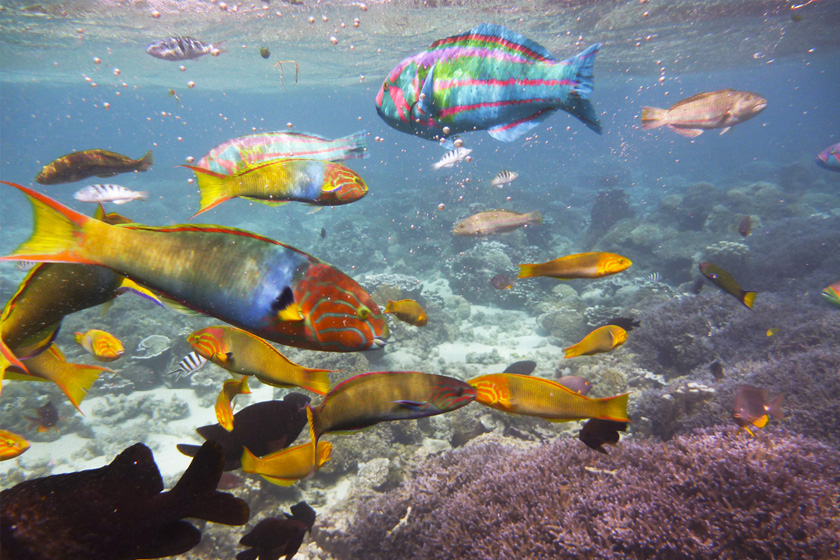 The island boasts the world’s southern-most coral reef. Here you’ll find crystal clear water, over 500 species of fish and 90 coral species. Whales and dolphins appear offshore in season. Deep-sea fishing, tennis, cycling or just drinking in the tranquillity are other favourite pursuits on the island.

This magnificent island is like nowhere else in the world. We’re sure you’ll agree.

Lord Howe Island is one of New South Wales’ best kept secrets. The World Heritage listed island boasts an extraordinary natural environment and is the only surviving remnant of an extinct volcano chain and the world’s southern-most coral reef.

Measuring 11 kilometres long and almost three kilometres wide, Lord Howe provides plenty of activity from mountaineering on the high peaks and cycling through rainforests to reef walking and snorkelling in the lagoon. Fishing and surfing are also popular pursuits. The warm sub-tropical climate of Lord Howe (averaging 26 degrees Celsius in summer and 16 degrees Celsius in winter) makes it an ideal year round destination.

By cycle or foot, there are many stunning aspects of the island to explore. One of the best points to start is Mount Gower (875 metres) and Mount Lidgbird (77 metres), the tallest peaks, rising powerfully above the sandy beaches and green-blue of the ocean. From here you’ll discover that much of the land is covered by rainforest and palm forests (the kentia palm is indigenous and exports of its seeds are a major industry), with grasses in the lower regions. 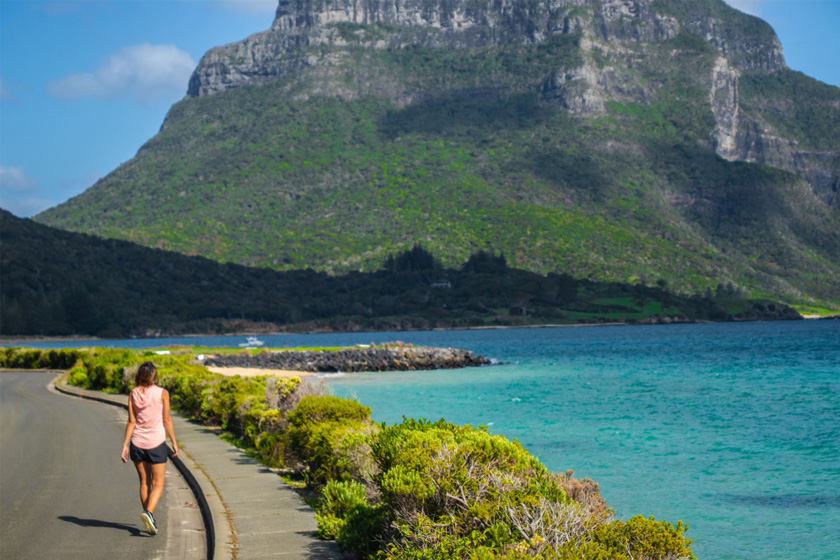 The islands are breeding grounds for large colonies of seabirds and have the largest breeding concentration in the world of the red-tailed tropic bird. Some 168 bird species have been identified.

The underwater world around the islands is another unique feature. This is the meeting point for the tropical waters from the north and the cooler southern waters. The reef stretches for six kilometres, providing pristine reefs for diving and snorkelling.

Accommodation ranges from family-run guest lodges to self-contained apartments. The island’s 300 residents are keen to retain their idyllic island lifestyle and have limited the number of tourist beds to 400.

Lord Howe Island is New South Wales’ only World Heritage Island and one of only four Island groups in the world to have this listing.It was officially inscribed in 1982 for its ‘rare collections of plants, bird, marine life and exceptional natural beauty’. Both visitors and the community are committed to the protection of its fragile and unique environment.

Lord Howe has a prolific birdlife with some 130 permanent and migratory species including the once endangered and rare Lord Howe Island Woodhe. Birdwatching tours are a popular attraction of the island. 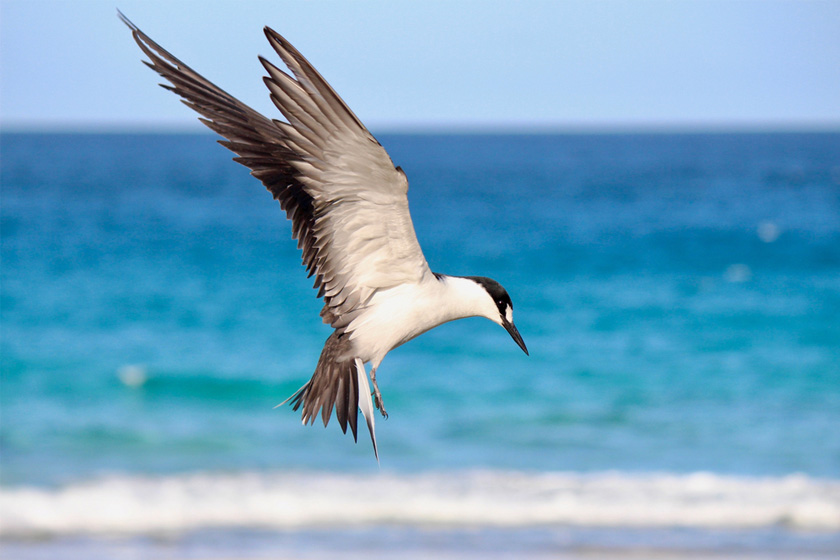 The surrounding waters have been declared a Marine Park, home to over 490 fish species. The surrounding coral has 80 species, 4% of which are unique to Lord Howe waters. There are two accredited Diving Schools on the Island, and snorkelling and reef walking is a ‘must do’ for all age groups.

Temperatures range from about 28 degrees Celsius in summer with lows of about 13 degrees in winter. The months of July, August and September can sometimes be windy.

Getting To Lord Howe Island

Under a 2-hour flight with QantasLink direct from Sydney or Brisbane with national and international Qantas connections.

Discover some of the accommodation in and around Lord Howe Island

Discover some of the tours options around Lord Howe Island