Adelaide is a city of great visual harmony and classical elegant style, superbly set beside the River Torrens between the Adelaide Hills and waters of Gulf St Vincent. The wine and festival capital of Australia, Adelaide is one of the most vibrant, stylish and innovative cities you’ll ever visit.

It’s a place to experience the buzz, culture and convenience of a big city without the frustrations. The city centre, surrounded by parklands, is a charming blend of historic buildings, wide streets, groovy shops, street cafes and restaurants. And because Adelaide is known as the 20-minute city, you can experience it all on a series of easy short walks.

Catch The Ghan, Australia’s great southern railway from Adelaide to Darwin and experience the great outback.

Your food and wine experience begins right in the city centre with the Adelaide Central Market; the National Wine Centre of Australia; vibrant cafes and restaurants boasting some of Australia’s best chefs; and events such as Tasting Australia.

You’ll find a mix of restaurant strips dotted right across the city – Rundle Street East for alfresco dining. The Parade at Norwood for great Italian food. Gouger Street for seafood and Asian fare. And anything goes on O’Connell and Melbourne Streets in North Adelaide.

Heart of the Arts

Festivals and events occur with remarkable frequency for a city of Adelaide’s size. 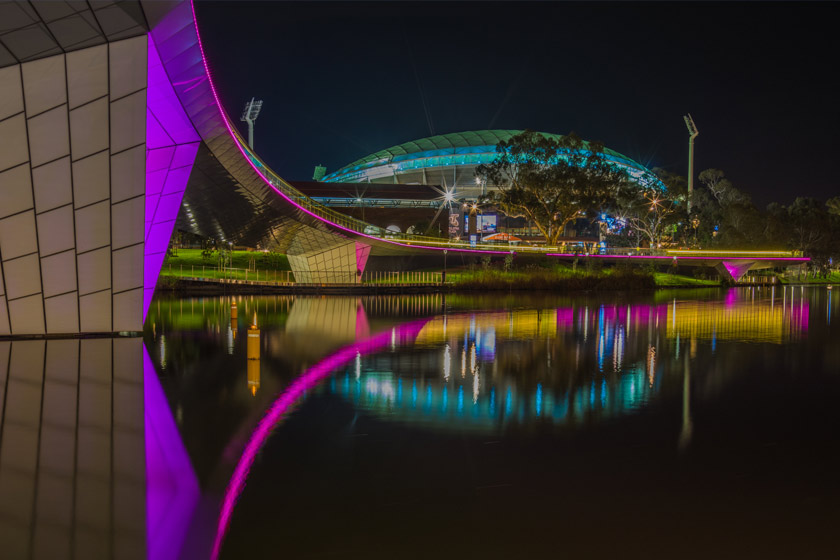 The Adelaide Bank Festival of Arts is one of the most innovative arts festivals in the world, while the Adelaide Fringe is now the second biggest in the world after Edinburgh.

The Clipsal 500 Adelaide V8 race annually attracts more than 200,000 people and has been named Australia’s best major event. Adelaide’s international music festival WOMADelaide has the Adelaide Botanic Garden as its backdrop. And the Tour Down Under is the biggest road cycling event in the land.

Swing the Bat with Bradman

Pay homage to Australia’s cricketing icon, Sir Donald Bradman, at the State Library of South Australia. The Bradman Collection features more than 140 items, from trophies and bats to oral recordings and 52 scrapbooks on The Don’s brilliant career. Then take a tour of Adelaide Oval, widely regarded as the most picturesque cricket ground in the world.

Join thousands of people buying, selling and tasting the best of South Australia at the Adelaide Central Market, established in 1869 and now the largest undercover market in the southern hemisphere. Nearby China Town is also great for fresh local produce and authentic Chinese food.

Visit Haigh’s Chocolates Visitor Centre, home of Australia’s oldest surviving chocolate-making company and one of only a handful worldwide still making chocolate directly from cocoa beans. Take a free, 20-minute tour of the factory and check out the heritage displays before getting down to business in the tasting room.

Tram it to Glenelg

Ride Adelaide’s historic tram from Victoria Square in the city to the beachside suburb of Glenelg. Learn the mysteries of Great White Sharks at the Rodney Fox Shark Experience.

Discover South Australia’s settlement history at the Bay Discovery Centre and see where the colony’s first government was proclaimed under the Old Gum Tree. In Glenelg you’ll also find a great beach and wooden jetty and the lively shops, cafes and restaurants of Jetty Road.

Swim with dolphins just 20 minutes from the city centre on a Temptation Sailing cruise. The 17-metre catamaran, based at Holdfast Shores Marina in Glenelg, is perfect for cruising beside Adelaide’s endless sandy shoreline. Afterwards, stick around to explore Holdfast Shores and its many great restaurants, pubs, luxury boats and apartments.

Location: Catch the tram from Victoria Square in the Adelaide city centre

Head to historic Port Adelaide for a look at the hands-on South Australian Maritime Museum and a short cruise to see the divine dolphins of the Port River. 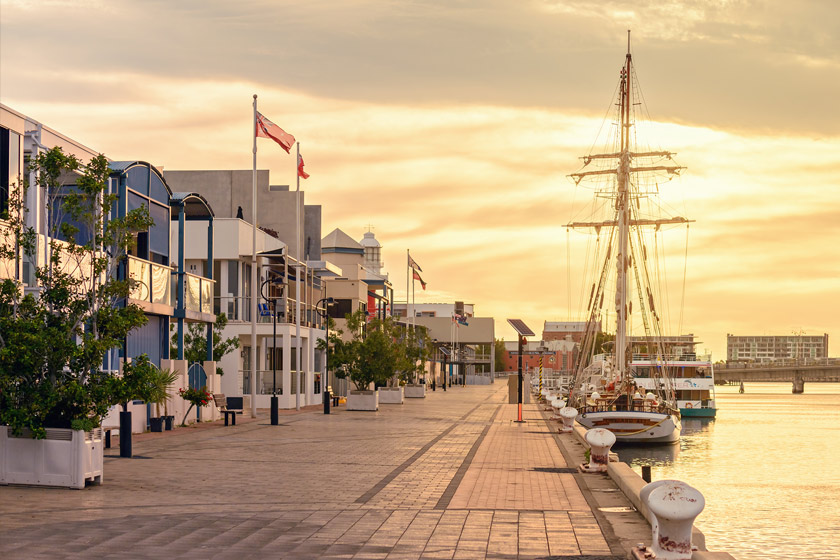 Then delight in the seaside village atmosphere of Semaphore, with its majestic Palais right on the water and a long boulevard of antique shops, cafes, bakeries and pubs.

Marvel at native and exotic flora displays and 5000 roses at the International Rose Garden. Stroll through a lush tropical rainforest in the Bicentennial Conservatory (it’s the biggest glasshouse in the southern hemisphere). Established in 1857, the 16-hectare Adelaide Botanic Garden is right on North Terrace and still South Australia’s most popular attraction.

Explore the world’s largest collection of indigenous artefacts in the Australian Aboriginal Cultures Gallery, an award-winning exhibition in the South Australian Museum. Delve into the life of Antarctic explorer Sir Douglas Mawson, or examine the opalised skeleton of a six-metre-long plesiosaur. Free tours run weekdays at 11am and weekends and public holidays at 2pm and 3pm. And for contemporary Aboriginal culture, head a few blocks away to Tandanya, the National Aboriginal Cultural Institute.
Location: North Terrace, Adelaide city centre

See one of the best Australian colonial art collections in the world, renowned dot paintings of the Western Desert, landscapes by Sir Hans Heysen and the works of Australia’s much-loved impressionists including Tom Roberts and Frederick McCubbin. The Art Gallery of South Australia is housed in one of Adelaide’s most beautiful buildings – and you can’t leave without coffee and cake in the café out back. 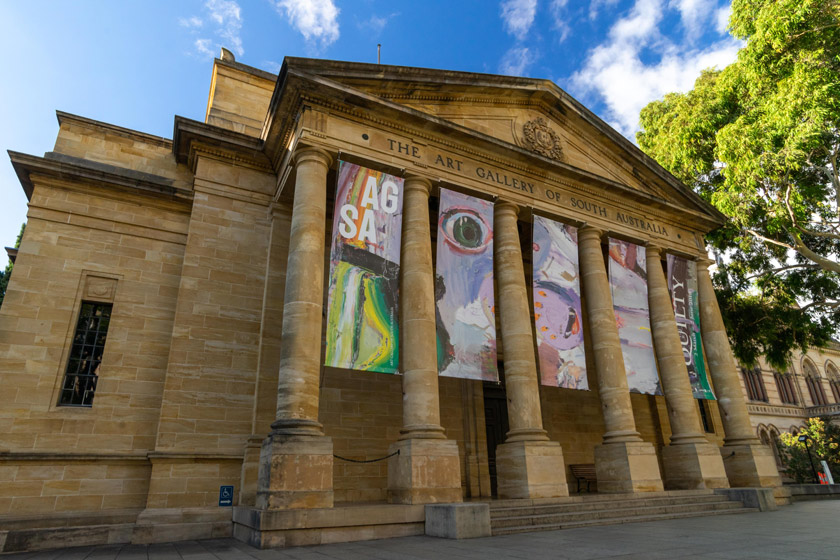 The Home of Australian Wine

Test your skill at virtual wine making; meet the winemakers on the interactive Wine Discovery Journey; and delight in great Australian architecture at the National Wine Centre of Australia. Part of the University of Adelaide, the centre showcases the national wine industry and is a great place to start your journey through South Australia’s wine country.

Adelaide is proud of its reputation for arts and culture. Set in an area of spectacular natural beauty and blessed with a mild Mediterranean climate, its residents enjoy the good life.

On even-numbered years it stages one of the world’s premier arts festivals – the Adelaide Bank Festival of Arts and Adelaide Fringe Festival – which attracts thousands of Australian and international performers. The global sounds of the WOMADelaide world music festival can be heard every summer near the Adelaide Botanic Garden. 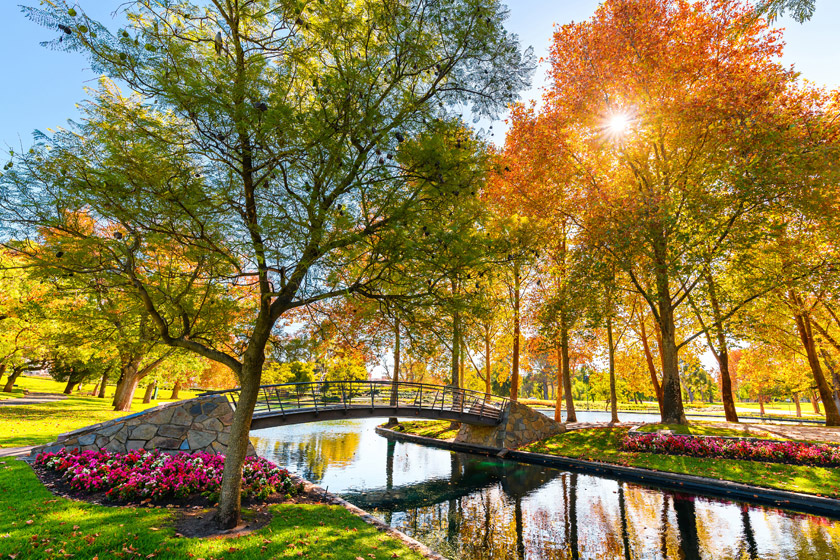 One of the country’s most famous artists, Sir Hans Heysen, lived and painted here. His home and studio can be visited in the Adelaide Hills and are virtually as he left them. The Hahndorf Academy features local artists and artisans at work in a wide range of crafts. 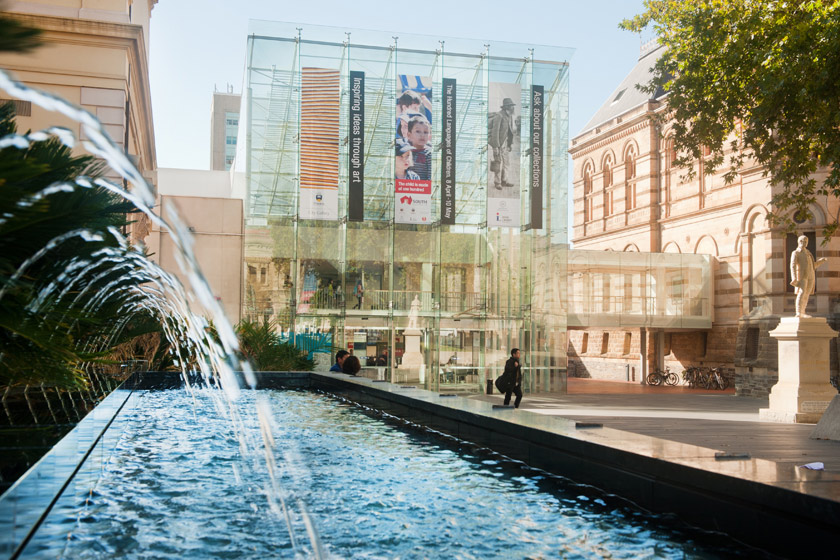 Stroll along North Terrace to see magnificent examples of 19th century architecture in the renovated railway station and casino complex, the past and present Houses of Parliament, Government House, the Art Gallery and Museum, Universities of Adelaide and South Australia and a museum dedicated to Sir Donald Bradman, Australia’s most famous cricketer. The Adelaide Festival Centre features world-class productions throughout the year.

Designed in 1836 on a square mile grid the city is compact and easy to walk around. High-rise buildings have been kept to a minimum and the wide streets, original stone colonial buildings, mansions and workers cottages remain a delight to see. The city precinct is surrounded by a vibrant green belt of parklands so close you can relax over a picnic on the lawns. 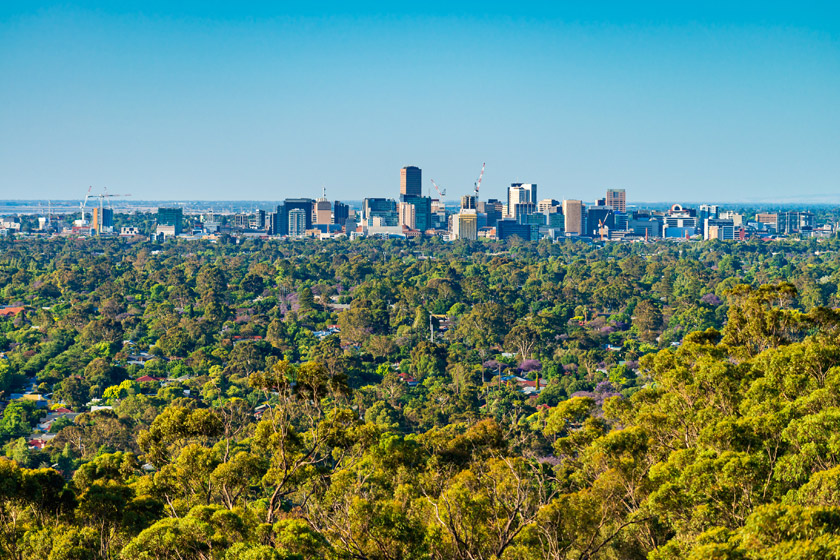 Unlike other Australian states, South Australia’s citizens were not drawn from convicts but were attracted by the potential to build wealth in wool, copper and wheat. Along the North Terrace are the cultural icons of the South Australian Museum, Art Gallery, University of Adelaide and the Adelaide Casino in the beautifully refurbished 1920s railway station.

The 125-year-old Adelaide Central Market provides a noisy, colourful, aromatic and lively meeting place for visitors and citizens alike. This is multicultural Australia at its best with some 48 cultures bartering and selling produce in friendly rivalry. Accommodation is plentiful in a wide range of international and boutique hotels just a few steps away from all the above.

Blessed with a great climate and good soil South Australia is home to some of the freshest food and finest wines in the country. About 70 per cent of Australia’s export wines come from wineries at Barossa Valley, Clare Valley, Eden Valley, McLaren Vale, Coonawarra, Langhorne Creek and others. Try them all at the National Wine Centre of Australia in the heart of the city.

These famous winegrowing areas are also renowned for their restaurants and an interesting alternative to city dining. Adelaide has a reputation for innovative and affordable cuisine which, when combined with the local wines, is a memorable experience. Famous eat streets include O’Connell and Gouger streets, Norwood Parade and Rundle Street East or the ‘East End’.

For a leisurely meal by the sea try one of the popular cafes or restaurants at Henley Square (where the Oscar-winning movie Shine was filmed) or Glenelg, or stay close to the city centre for Asian fare in the food halls at the Adelaide Central Market. For an indulgent meal head for Penfolds Magill Estate Restaurant (home of Grange wine), Bridgewater Mill, Jarmers, Alphutte or The Grange – winner of the Remy Martin, Gourmet Traveller, Restaurant of the Year Award and home to the city’s acclaimed master chef, Cheong Liew. 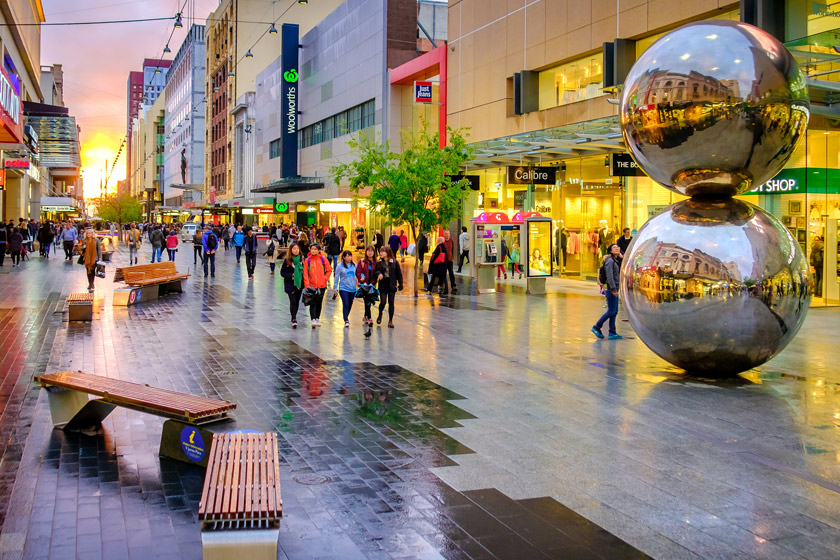 While in South Australia try naturally-brewed Coopers ales and beers and the hugely successful Two Dogs Alcoholic Lemonade, the world’s first alcoholic lemonade, invented by a local resident with too many lemons and since purchased by the French firm Pernod Ricard.

Sweeten the palate with Haigh’s Chocolates made by the last chocolate maker in Australia to still import cocoa beans and roast them to control flavour and texture – choose from hand-dipped soft centres or double dark and chewy.

Start the day with breakfast at the Adelaide Central Market. Eat homemade muesli with stewed rhubarb and yoghurt washed down with a giant latte to the cacophony of sounds and aromas of this lively marketplace.

The locals shop here and visitors come to gaze in wonder. Nearly 50 nationalities spruik their specialities in what must be one of the most multicultural meeting places in the country. Fishmongers, greengrocers, fruiterers and butchers compete with a brigade of buskers. Then head for galleries like JamFactory Contemporary Craft and Design, Metal and Stone and Gray Street Workshop.

Metal and Stone specialise in silver and jewels as well as the exquisite and original spectacle frames made by Peter Coombe. Commission something to suit your personality. The JamFactory and the Gray Street Workshop artists and craftspeople produce an eclectic range of goods in leather, jewels, metal, glassware and all sorts of functional pieces.

Outside the city in the Adelaide Hills small farmers gather at the weekend markets at Uraidla, Littlehampton, Mylor, Meadows and Macclesfield and the organic market at Stirling to delight the senses with fresh seasonal produce (honey, herbs, strawberries, apples etc) home-made cakes and preserves. On Saturday morning, head to eclectic farmers markets in Willunga on the Fleurieu Peninsula or Angaston in Barossa for a celebration of regional produce, cuisine and coffee.

Discover some of the accommodation in and around Adelaide

Discover some of the tours options around Adelaide